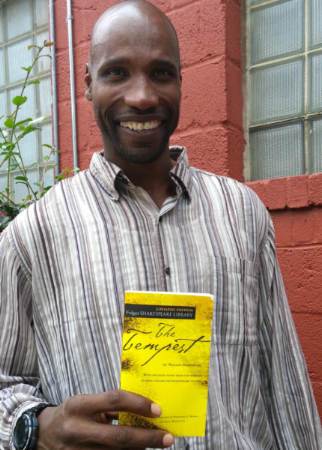 GSU acting instructor John Frazier taught a master workshop in acting and script analysis for The Tempest.  CGA Scholars chose scenes and monologues from the play and John workshopped ways to perform the lines.  Scholars learned how to deconstruct characters, isolate their language, and emphasize movement and breath.  The result? Students brought Shakespeare’s characters and words to life in the classroom. Among the most compelling performances: the Boatswain’s call to action in Act 1: “Down with the topmast”; Stephano’s song in Act 2: “The master, the swabber, the boatswain and I”; and Prospero’s delivery of the epilogue in Act 5: “Now my charms are all o’er thrown.”

John’s preparation for the class began weeks in advance. He worked with Common Good Atlanta as a curriculum developer.  He explained the fundamentals of an acting workshop and ways that he could bring a college-level acting class to the scholars at Phillips State Prison.

John’s visit was part of Sarah Higinbotham’s summer class on The Tempest.  In this class, the CGA scholars study the play and ways it has been adapted in theater, film, music and visual art.  CGA thanks John Frazier for his help in the classroom at Phillips State Prison and looks forward to further contributions from him.